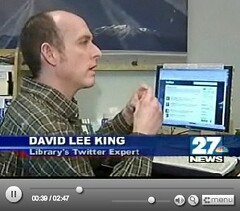 On Friday afternoon, I was interviewed again about Twitter – this time, by our local NBC affiliate, channel 27 news. They interviewed me, our head of Communications and Marketing, and our Communications Editor (I think that’s her title). It was a fun interview – here are some pics from the interview, and here’s a link to the web version of the interview.

Hannah Wooldridge interviewed us, and during the interview, asked me to ask my Twitter friends some questions. First we said “hi” – and 36 people quickly responded with some form of “hi” back within minutes (interestingly, the first reply came from the Netherlands!).

Then I asked this: “what should our tv reporter ask about twitter? What’s cool“? Here are the replies I received:

Everyone who replied – you rock – thanks! Everyone – make sure to read and think about the ideas in the above responses. Twitter started with a simple question – “what are you doing?” The ideas presented above go WAY beyond that. It touches on the community experience I wrote about in my book!

Started off talking about the recent Hudson River plane crash, and how the news of that and information about that broke first in online media like Twitter, Flickr, and Wikipedia WAY before it hit traditional media.

Talking about Twitter and how news happens fast. Metioned the dude that was arrested in a different country and how he was able to get help quickly because he tweeted for help.

instedd – a twitter feed for breaking news on disease outbreaks

He created a 9/11 email discussion list – they were getting a TON of posts. Some of it was responses to things they were seeing and reporting stuff. Ex – he lives in the Foggy Bottom area of DC – he stood on his balcony and reported if he saw smoke or not then reported it

He started the Hurricane Information Center for news and help about hurricanes – they’re using wikis, blogs, online database data, etc and coordinating it all together

They used Ning for this.

What happens if we get it wrong because we simply don’t know enough yet? You have to get your employees as much info as you can, as quickly as you can. Because it’s not just the marketing/PR types that share that info anymore – it can be anyone.

They decided to blog some info that wasn’t getting out into the news media – and the news picked it up and quoted from it.

Gave example of how a twitter user was angry with them and posted angry stuff. GM actually called her, they listened, and she ended up doing a very positive blog post saying “hey – they’re real people.” Great example of connecting with customers and listening.

You have to be able to do 1-on-1 communication now – even if you’re a big company.

And I stopped typing the Q&A …

We live in a new world. A world in which local decisions made by very small groups can go viral, can be spread by a variety of social media tools, and can even reach global and unintended audiences. We are no longer private or anonymous! I watched just this thing unfold last Thursday at my library’s Board of Trustees meeting.

By now, some of you have probably heard about the decision my library’s Board of Trustees made last Thursday regarding restricting access to four books in our collection. By the end of the evening, our very local library board meeting was the 7th hottest “trend” in Twitter.

I had decided to tweet the board meeting – I posted play-by-play public comments made by people in the community and the deliberations of the board on a hot topic. I used #tscpl as a hashtag, since I wanted to provide an easy way for people to follow the meeting as it progressed. 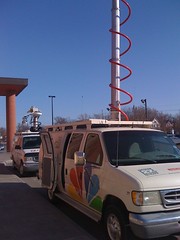 And I started tweeting. I took photos of the local TV news vehicles lined up outside the library and a few pics of the meeting, and posted them to Twitter via the TwitPic service (a service that lets you easily share photos on Twitter). Jim Ogle, general manager at a local TV station (and cool tweep at @jimogle), was also present and tweeting at the meeting, as were a few other Twitter users.

Who followed the conversation? Local Topekans who weren’t at the meeting were following. Library staff that worked the evening shift were following along, too. Since I have my tweets linked to my Facebook status, Facebook friends were also following and participating by making comments and asking questions. Other librarians were following the meeting, as well. 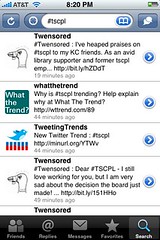 At some point in the evening, our hashtag, #tscpl,”trended” on Twitter. What’s trending? “Trending topics on Twitter are keywords that happen to be popping up in a whole bunch of tweets. We measure these topics and adjust them in real-time throughout the day. It’s a great way of finding out what’s happening right now.” – from Twitter’s blog.

And like I said, we were the 7th hottest trend for a while – sure wish I had a screenshot of that! The screenshot I DID get is from my iPhone, capturing some Twitter Trend-watching services that noticed our hashtag was trending.

The next day, the conversation continued, and it went global. People continued tweeting about the meeting and the decision, and I posted news stories as I found them. An AP reporter was at the Thursday meeting, so we made the AP newswire… and we quickly made the USAToday, the International Herald Tribune, and the Taipei Times, of all places. And of course the usual library–related news sites noticed.

Some unintended but interesting sites: two adult industry news sites (found via twitter searches for tscpl and topeka), some book industry news sites, and a children’s rights group. With some of these, I’m guessing they follow a combination of keyword searches and RSS feeds – they primarily picked up the AP story.

The conversation on those sites is continuing, since many of them allow comments on each article! It’s actually quite interesting to compare the local comments on the Topeka newspaper story to the comments on the USAToday story (98 comments so far).

What’s this all mean? That Twitter works great as a real-time information spreader and conversation starter. That people are interested even in seemingly local stuff. That … yes … even your small library board meeting is no longer private.

The WORLD is watching.

Dang, it just dawned on me who this guy is – he’s a videoblogger!

Traditional Media production:
until recently, to produce content for a large audience you needed to be a … publisher, broadcaster, billboard owner, etc…

common thread: online communities where people are actively encouraged to use and share each other’s original content

bbc have your say (another show)
centralized forum for discussing news
They allow people to rate other’s comments – that’s cool
Then, BBC uses those comments elsewhere on the site – they pepper their official stories with the highly rated user comments

hmm… can public libraries do this? Ask customers to take photos and video of local newsish events, and publish them somewhere on the library’s website? And then pepper that with books and videos that customers can check out… that’s related to the customer stories? That’d be pretty neat.

USA Today
embedded social networking across site
not balkanized to a special section
users can comment on any story
comments featured on homepage, elsewhere
syndicating blogs from around the internet

OhmyNews – Korean online news service
publishes in korean, english, and japanese
dedicates 20% of its space to citizen journalists
invites public to submit content as volunteers
ones that submit consistently get paid

One good way is to get an article on the front page of the Kansas City Star!