Ah – Snapchat. Yet another newish social media channel (launched in 2011). One that started out very niche, and did something slightly different with posts – they disappeared after a set amount of time.

Teens loved it; parents, not so much.

A lot has changed in five years. Snapchat is quickly becoming a go-to place for brands. Which means it can also work for us libraries!

Here are some recent facts about Snapchat:

And here’s the biggest fact (well, ok – not really a fact, but …) – if you’re over 40, Snapchat seems to weird us out. Adults tend to find Snapchat confusing. Why? I think it’s because the app doesn’t have the normal labeling we have come to expect.

When you open up the app, you don’t get a box to type in – you get the camera. There aren’t menus – you either swipe left, right, or up (or you can click on the unlabeled icons).

So yeah – it’s not made for us. It’s made for people who instinctively know to just play around with it until they figure it out.

I think it can. Stay tuned for my next post on some “how to use it” basics!

Technology Trends in Libraries & the Emerging Generation from David King

It’s a different presentation for me – talking about technology trends for teens and kids. Thankfully, I have three teenage kids of my own, so it really wasn’t too big of a stretch.

Anyway – here’s the presentation – I created one with slightly more info on the slides. Enjoy!

Kevin Smith just pointed me to Wake County Public Libraries‘ series of online storytime videos. Wake County made them to support their local Every Child Ready to Read initiative.

They’re nicely done – go watch them! Here’s the link to their Youtube Playlist for all the videos. The video embedded in this post is an animated sing-along song video … and now that song is going to be stuck in my head the rest of the day. Can anyone say “earworm?”

How about you? What cook stuff for kids and teens does your library do on their digital branch? I’d love for you to share!

Some of you might have heard about this – just passing it along: YALSA has some Teen Tech Week mini grants to give out to some lucky libraries! From Yalsa’s website:

“Thanks to our 2008 Corporate Sponsor Dungeons & Dragons, you could win one of twenty mini grants for your celebration! Mini grants of $450 and $50 worth of Teen Tech Week products are available to YALSA members who plan to offer unique, engaging programming activites, services or resources to celebrate Teen Tech Week in their community. Download the official rules and submit the application form and your proposal to the YALSA office at [email protected] by January 7, 2008.”

So if you want to do this, get those application forms in fast! 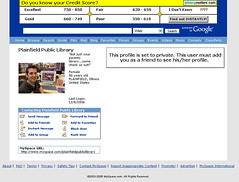 I just saw Plainfield Public Library’s MySpace page (via Michael Stephens). Well, not really – take a look at the screenshot – their MySpace profile is set to private.

So what? Well… it’s a usability and experience thing. There will be MySpacers that want to peruse the page, see what programs the library has to offer, etc – and not want to sign up to be a friend of the library. By setting their profile to private, the library is basically blocking all their great MySpace content from ALL POTENTIAL CUSTOMERS. It’s sort of like saying “yes, you can enter our library building! Of course! But – do you have a library card? ‘Cause you can ONLY enter our fine library if you have a library card.”

The newspaper article about the page (aside – extremely cool they received press about their MySpace page!) quotes a librarian saying they’ve added more than 80 friends to the site since August. My guess? They’d get more friends if the profile WASN’T set to private.