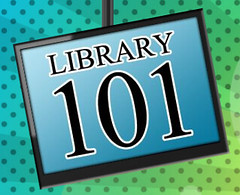 Michael Porter and I have been extremely pleased about the response to our Library 101 project so far. The video? Seven days in, it’s been viewed 11,200 times, and counting. The Facebook Page? 3157 fans and counting. Our Library 101 website with 23 essays? Lots of activity there as well.

And for the most part, response has been very positive. Sure, some of you loved the video and the essays … others, not so much – fair enough. So why do I say “positive?”

Because our goal with this project is being met – people are starting conversations about the changing face of librarianship and the future. In Facebook, at our Project site, and on other blogs and websites, too. Have we hit our mark so far? You bet. We hope those conversations continue, and grow into real change for libraries.

Interestingly, there’s a group of you that have questioned why we included Hulu, of all things, on our 101 list, so I thought I’d start up a conversation about that particular item.

Here’s what our 101 page says about Hulu and other multimedia tools: “Heard of new media tools and services, like iTunes (58), Netflix (59), Amazon (60), Hulu (61), and YouTube (62)? Yep – if you havenâ€™t already, be sure to learn them like the back of your hand. Because you WILL be (more likely, ARE) getting questions about them! Even better, gain some in-depth understanding of these services so you, say, know the difference between YouTube and Blip.tv (63), for example.”

We didn’t actually focus on specific tools (though I can see why some would think so – Hulu’s #61 on the list, after all). The goal of that section wasn’t so much on individual tools, but more about understanding the differences between the tools, and what the future holds for that content.

Why? A couple of reasons. First of all, it’s to help to our patrons:

The second reason services like Hulu, iTunes, Netflix, etc were included brings up a slowly growing dilemma for libraries.

Hulu claims to make more money through online ads for a tv show than traditional broadcast companies make with traditional commericals (heard at a presentation by Hulu). That’s a game-changer for broadcast programming. Combine that with Hulu getting more licenses for streamed content, Netflix going all digital, iTunes doing the same, and the fact that most of these services are already subscription-based, or are rumored to be thinking about a subscription-based model … what does that leave libraries with?

Nothing. That is, nothing physical to check out in the library. No DVDs (which I’m guessing will be disappearing as multimedia content shifts to primarily online access). These companies – at least right now – don’t seem to be interested in working with libraries. They’re going after individuals.

At the very least, libraries need to begin working with these corporations to help set up organizational licensing and check-out models for libraries (because if they aren’t subscription-based yet, they will be). And that really only begins to scrape the surface of emerging online content (ie., do you catalog it? Include it in our digital collection? can patrons comfortably watch multimedia content in our libraries? Etc).

So again – thank you guys so much for watching, reading … and starting these important conversations! The goal is to move libraries forward, one step at a time. And I’m pretty confident we can do it. What a fun time to be a librarian!