“Today, I spent part of the day connecting with people. I complained about a silly election video, chatted with a college friend about a band, and put some finishing touches on plans for a conference taking place at the library.

I did all this through Facebook. These days, it seems like everyone has a Facebook account. Quite a few of my professional colleagues and most of my family have Facebook accounts. Nationally, Iâ€™m a bit ahead of the curve: Approximately 41% of the U.S. population has a personal Facebook profile, according to a 2010 study from Edison Research (PDF file). According to Wikipedia, 50% of those Facebook users actually log into their Facebook accounts every day. Total Facebook population? Globally, over 600 million of us currently use Facebook, MSNBC reported in January, and most of them interact every day with an average of 130 Facebook friends and acquaintances.

Think about that for a second. What library wouldnâ€™t love to have a direct, free line to potentially 41% of your communityâ€™s ear? Keep in mind, these people could be connected to another 130 people in your community. Thatâ€™s a lot of free communication!

So, stake a claim in this digital land and create a Facebook Page for your library. Hereâ€™s how to set up a Facebook account, and how to use it to connect with your community.”

Go read the rest of the article!

The always excellent Blake Carver, who runs LISNews and LISHost (they do an awesome job of hosting my website), has recently created a new tool for us library types – LISEvents.

Here’s what Blake says about LISEvents:

“LISEvents is a community-based site intended to aggregate listings of library-related events of all types, sizes, and locations. The site also helps speakers find gigs and event planners find speakers.”

Blake’s goal is to list every conference,large and small, that might be of interest to those of us working in libraries. There’s also a place for speakers (just added myself).

So – check it out, add your library-related events, and add yourself, if you like that public speaking thing! 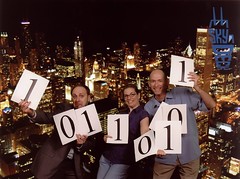 Read all about it here! Or just read this … remember that song/video Michael Porter and I created last year? Well… we’re at it again – with Library 101!

“Getting into this video is actually really easy. Simply take and share a picture of YOU posing with a 0 and a 1! (Tagging it with library101 on flickr will be really helpful). We even have the flickr group linked above [ok, I linked it here] where you can put your 101 pictures. So câ€™mon! Do it and get just a little bit famous! Your family and friends will love finding you pop up in the video (and maybe even your coworkers?)! Put your kids in it! How about the family dog!? And you know grandma loves the library too, riiight?

The most interesting your submission the more it will be featured, so get creative!

Look for the song and video in October of 2009 (debuting at a special â€œConnecting Through â€œLights, Cameras & Actionâ€ session at the Internet Librarian Conference in Monterrey, California).”

Now all Michael and I have to do is this: