This is a video review of the FiFINE K669 USB microphone. I was actually emailed out of the blue, and asked to do a review in exchange for the microphone.

As some of you know, I love microphones 🙂 So … here’s my honest review (hint – it’s a nice microphone!).

Sound quality – fast forward about halfway through the video (2 minutes 5 seconds) if you want to hear the microphone in action. I think it sounds really nice for such an inexpensive microphone (as in approximately $30)!

Here’s a couple of Amazon links:

So – in the market for a USB microphone to use for Skype/Zoom/Google Hangouts/etc.? Or a simple-to-use microphone for making simple recordings? This mic will work pretty well for that (well, based on my 2 minutes of use, anyway).

This video is my first test run using the microphone. I doctored the audio up just a bit – I used a little soft compression on the audio to even out my loud/soft/loud talking, and boosted the volume up by 6db.

But I didn’t have to cut out any hissy noises, which is pretty sweet. The only bad part of the audio is the rumble from my car – not bad at all (well, unless you are listening closely with headphones. Then it’s pretty rumbly).

I made the video with my iPhone. I need to learn how to point the video at my head!

Anyway – take a listen. As far as ease-of-use goes, this microphone is very easy to use!

I just bought theÂ ProJive XLR mic cableÂ for my iPhone. What’s it do? It’s an XLR to headphone jack cable adapter, and it’s made to plug a normal XLR microphone into an iPhone.

This lets me use my better-quality microphones (well, better than the built-in iPhone mic, anyway) for recording. It works with any audio app (like the voice recorder) or with video apps, too.

So – check out the video above, and listen to the sound. Not bad for an iPhone video, huh? Also listen for the unmistakable cell phone interference – that “beep beep beep” noise that you sometimes hear when a cell phone is close to some speakers. I’ll have to experiment more – if that interference happens a lot, the cable isn’t going to be all that helpful.

But we’ll see. Until then, I can now get quality audio in my iPhone videos effortlessly. Sweet! 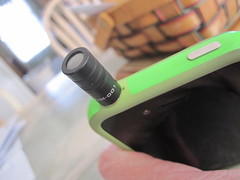 **warning** the first part of this video is very quiet, and the last part is LOUD – don’t scare your office-mates!

I occasionally shoot video with my iPhone, and have noticed that the internal iPhone microphone really isn’t all that great. Which is one reason I don’t use the iPhone video feature more often – the audio it records for video varies pretty wildly. For me, anyway!

So when I saw a link to Amazon for the i-Microphone, I clicked and read. And bought.

It’s cheap – it’s listed at $25.99 at Amazon right now. And it’s LOUD. The manufacturer’s website claims the i-Microphone boosts the audio level “up to 12 dB louder” – and I believe them!

Check out the video I made (embedded in this post). For the first part of the video, I’m using the built-in iPhone mic. Then I plug in the i-Microphone … and you can suddenly hear me. There is a HUGE difference in levels. HUGE.

So – if you like to shoot videos (or record audio) with your iPhone (or pretty much any device that can use a headphone jack plugin for audio) – you might find the i-Microphone pretty darn useful.

I see lots of people give presentations … and hear lots of presenters with microphone problems.

I know a little bit about microphones and how to get the most out of them, so here are 5 Mic Tips for Presenters!

Have some microphone tips not listed? Add them in the comments!

1. Get close to the mic! Most mic and volume problems are solved if the presenter simply moves his/her head closer to the mic.

2. Speak directly into the mic (or slightly angled if your P’s and S’s are popping a lot). I see lots of speakers hold a mic down by their chest. Bad! Be bold, be brave … and talk into the mic.

3. Do a sound check before the event. Make sure to talk into the mic like you normally would during a presentation – so no embarrassed whispering. Also, use that time to get familiar with the mic. See if it has an on/off switch, a mute button, a battery light, etc.

4. Avoid feedback. That high-pitched, squeaky feedback is icky, and it’s really pretty easy to avoid, if you follow these three steps:

5. Use the on/off or mute button. If you need to cough or say something privately, either step away from the mic or use the on/off/mute buttons. That’s what they’re for.

Hopefully, these simple tips will help you be a better presenter. Got any mic tips of your own? Share them in the comments!