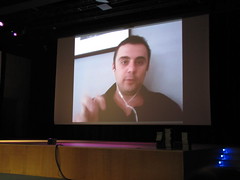 Gary talked a lot about his background, which is very important to his story of how he uses social media and why. If you want more info on that, make sure to read his book, Crush It!: Why NOW Is the Time to Cash In on Your Passion

(given out to all conference attendees).

Became passionate about wine, decided to build the largest wine company in the US.

spent 12-15 hours a day in social media, building a community. Has been able to monetize that community

pointing out the fact that he is speaking to us from his apartment in NYC, for free via Skype – 5 years ago, this would have been extremely pricey.

I tweeted some nice quotes and thoughts, too – here they are: